Artist SinGh is a famous and controversial artist based in South West, Michigan known for his signature style of drawing and painting. He mostly uses a continuous line to form an image totally eradicating the outer limits of an object or figure. The zigzagged line and the missing outline of an object results in flaring movement of energy.

In his early years he was called ‘The World’s Best Stunt Painter’, SinGh rose to fame with his unique ability to paint while performing stunts such as levitating, jumping from heights, hanging himself from trees, etc. It turned to be a great marketing tool that resulted in local celebrity status for SinGh. His shows are high on entertainment quotient. The Kalamazoo Gazette has referred to him as the man, who redefines art.

Singh’s organizes private exhibits and large scale public exhibitions for his collectors. He represents his brand only in selective galleries. SinGh’s art can be seen in many in many parts of the world, his work is on permanent display in galleries in US, Dubai, and India. Singh claims that he is very experimental and loves trying new ways to make art which is evident from his past track record. He has experimented with techniques like Letterism, Centrism art, No touch painting, Stunt painting, Drip painting where he paints real images without actually touching the canvas, and he builds large-scale sculptures some up to 100 feet tall. And to attract media and bring crowd to his shows he jumps down from the top all on the name of ART. It’s Crazy!

In his early years he imitated many masters of the past and had great influence of Picasso, Dali, Bob Ross, just to name few. Artist Singh holds a Guinness World Record for the longest painting, and other world records includes fastest painter, largest cardboard sculpture, longest drawing by an individual.

Many news stories have been written about him. SinGh’s love for unconventional painting methods has made him the center of attraction. In the past, SinGh has been widely reported by the media for his controversial works. He has stated “many might not see the meaning in these captive ideas but they have existed for thousands of years and will continue to exist. All I am doing is painting them—I am captive to making of art.” 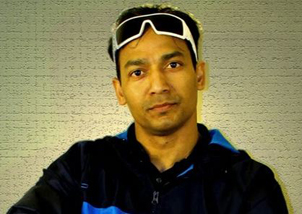 Posted by Geordie Gardiner at 20:46