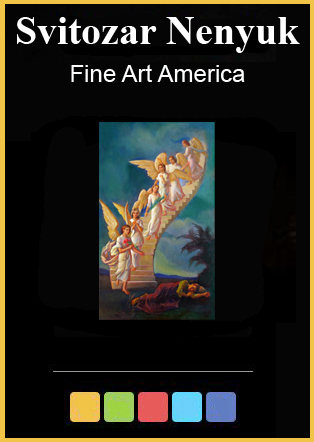 Svitozar Nenyuk is known primarily for his religious paintings depicting angels, saints, and martyrs, and for his portraits.

Svitozar was born in the Carpathian Mountains. Soon after his birth, instead of a toy his father gave him a brush. He began painting and has continued doing art ever since.
When he was eleven, he enrolled at the Kyiv Republican Art School.
There he studied for seven years from 1973 to 1980.
After that he studied briefly at the Odessa Art School in 1980- 1981.
He then moved to Lithuania.

In 1991 he emigrated to the United States and landed in Lincoln, Nebraska.
In Nebraska he was elected an honorary member of Lincoln Artistic Guild.

He eventually moved to Rockford, Illinois in 1994.

Svitozar had great affection for Rockford and became a naturalized American citizen while living there.

In 2002 Svitozar moved to Washington, DC, where he executed a series of works strongly marked by his craftsmanship. Since that time Svitozar does painting for his own pleasure.

Posted by Geordie Gardiner at 00:59