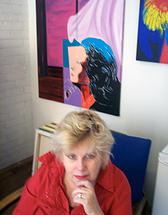 
Carol was born in Vancouver, B.C. She attended the University of British Columbia where she was granted a B.E'd with a Double Art Major.

After spending time in London, England.

Carol completed an Honours Degree in Printmaking from what now is known as the Emily Carr School of Art and Design.

Her education continued at Concordia University in Montreal where she received a Masters in Art Education, with Studio Studies. Carol taught at Concordia in the Fine Arts Department before moving to Toronto.

Carol's paintings are in collections in Canada and the United States and have appeared at numerous exhibitions thoughout North America.

Posted by Geordie Gardiner at 13:15